Mandalas are works of sacred art in Tantric (Tibetan) Buddhism. The word “mandala” comes from a Sanskrit word that generally means “circle,” and mandalas are indeed primarily recognizable by their concentric circles and other geometric figures. Mandalas are far more than geometical figures, however. For Tantric Buddhists, they are rich with symbolism and sacred meaning. In fact, the etymology of the word “mandala” suggests not just a circle but a “container of essence.” 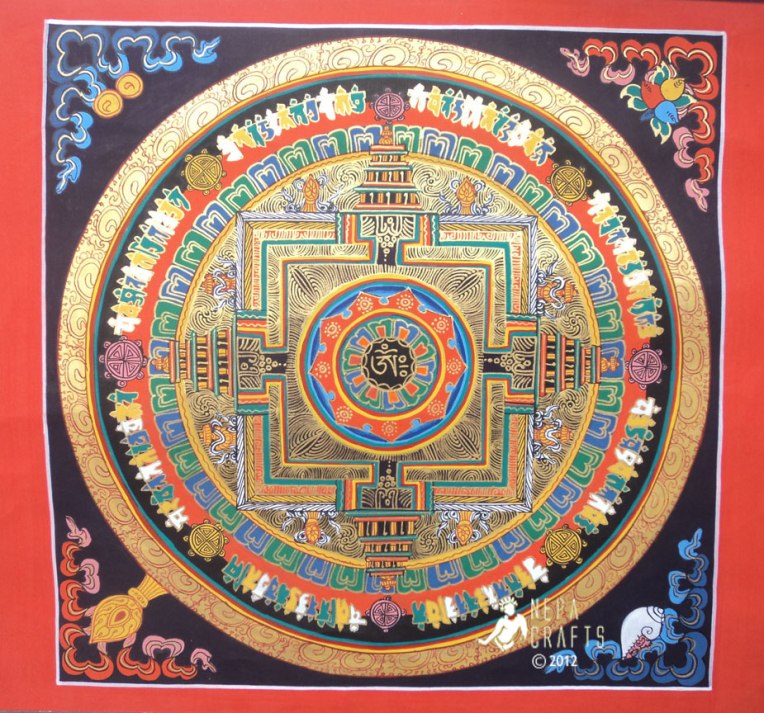 Before a monk may participate in the construction of a mandala, he must undergo a lengthy period of artistic and philosophical study. In the Namgyal monastery, the personal monastery of Dalai Lama, this period lasts three years.

The Tibetan mandala is a tool for gaining wisdom and compassion and generally is depicted as a tightly balanced, geometric composition wherein deities reside. The principal deity is housed in the center. The mandala serves as a tool for guiding individuals along the path to enlightenment. Monks meditate upon the mandala, imagining it as a three-dimensional palace. The deities who reside in the palace embody philosophical views and serve as role models. The mandala’s purpose is to help transform ordinary minds into enlightened ones.

Traditionally, four monks work together on a single mandala. The mandala is divided into quadrants with one monk assigned to each. Midway through the process, each monk receives an assistant who helps fill in the colors while the primary monk continues to work on detailed outlines.

Outside the square temple are several concentric circles. The outermost circle is usually decorated with stylized scrollwork resembling a ring of fire. This ring of fire symbolizes the process of transformation humans undergo before being able to enter the sacred territory within. It both bars the unitiated and symbolizes the burning of ignorance.

The next circle inward is a ring of thunderbolt or diamond scepters, which stands for indestructability and illumination. This is followed by a circle of eight graveyards, representing the eight aspects of human consciousness that bind a person to the cycle of rebirth. Finally, the innermost ring is made of lotus leaves, signifying religious rebirth.

The square structure in the middle of a mandala is a palace for the resident deities and a temple containing the essence of the Buddha. The square temple’s four elaborate gates symbolize a variety of ideas, including: 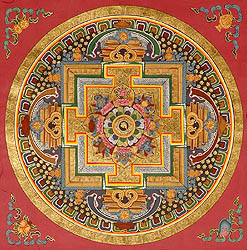 The Sand Mandala
Mandalas constructed from sand are unique to Tibetan Buddhism and are believed to effect purification and healing. Typically, a great teacher chooses the specific mandala to be created. Monks then begin construction of the sand mandala by consecrating the site with sacred chants and music. Next, they make a detailed drawing from memory. Over a number of days, they fill in the design with millions of grains of colored sand. At its completion, the mandala is consecrated. The monks then enact the impermanent nature of existence by sweeping up the colored grains and dispersing them in flowing water.

The sweeping of the mandala is symbolic of the impermanence of all things. No attachments.Monks did not permit the photography of sand Mandalas until recently because to cause a permanent image of a mandala was to defeat its religious intent.

The monks using funnels and cones to complete the intricate artwork of the mandala.

There was an error retrieving images from Instagram. An attempt will be remade in a few minutes.